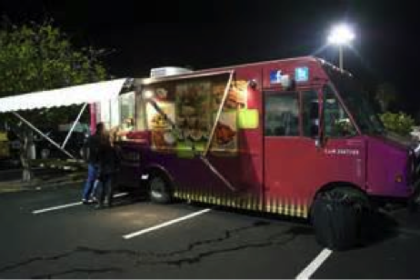 Maybe you saw the independent foodie movie Chef, a comedy about a chef who leaves his upscale restaurant job to fix up a food truck and sell Cubanos, mouth-watering ham, pork, and cheese Cuban sandwiches. The chef follows his bliss and a growing trend.

Food trucks are a hit these days, offering quality quick fare, including gourmet offerings, at a great price. On top of that, customers can feel good that they’re supporting the enterprising smaller entrepreneur.

Another local option is Midtown Mobile Cuisine, http://midtownmobilecuisine.com , at 4002 Almeda.

Here’s a sampling of favorite food trucks suggested by some of our followers:

Bernie’s is renowned for its homemade fries and condiments, including the ketchup (so popular that it’s sold in retail outlets), mayonnaise, chipotle aioli, and pickles. With names such as “The Principal,” “Study Hall,” and “Homeroom,” burgers include black angus beef, fresh-baked buns, and toppings such as jalapenos, fried egg, applewood smoked bacon, and braised pork belly.

In 2014, The Daily Beast named Bernie’s Burger Bus the “Best Burger on Wheels,” while The Daily Meal placed Bernie’s in both their 2012 and 2013 rosters of “The 101 Best Food Trucks in America.” Locally, Houstonia Magazine included Bernie’s in their “Best of the City” picks of “Top Burgers for 2013.”

Quite a Stir Curbside Stir-Fry. Chef-madeAsian-fusion stir fry with a tip of the hat to Texas. Fresh ingredients go into their tantalizing selections made from scratch daily. Try their popular egg rolls and shrimp skewers. The menu also includes scrumptious vegan and vegetarian choices. 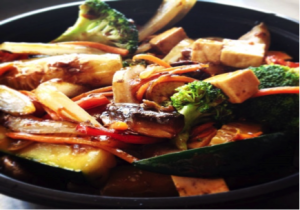 Fresh Asian-fusion cuisine from Quite a Stir

To find the schedule for Quite a Stir, go to https://www.facebook.com/curbsidestirfry or email them at Quiteastir@att.net.

The bus has the honor of having its S’mores Waffle recipe featured on the Food Channel website. On top of that, CBS Houston included The Waffle Bus in its 2013 list of “The Best Food Trucks in Houston.”

Find the Waffle Bus locations by going to www.thewafflebus.com or email them at Info@TheWaffleBus.com.

Coreanos. The word Coreanos translates as “Koreans” in Spanish, and the selections are described as “Mexican cuisine with Korean in-between.” The menu includes popular Korean barbecue tacos and burritos, as well as specialty fries. Kim cheese fries, one of the three French- fry items, are made with spicy twice-cooked pork belly, carmelized kimchi, cheese, and “el scorcho sauce.” Tasty!

Smithsonian Magazine named Coreanos No. 8 in a list of best food trucks in the nation for 2012 and crowned it the No. 1 food truck in Texas.

Lots of good eats to go from Eatsie Boys.

Other sandwiches are made from slow-cooked pork belly, marinated chicken, or tofu. The truck also serves falafels, not to mention mint-parsley-dusted beet fries and an assortment of ice cream popsicles.

The Daily Meal placed the food truck among the “101 Best Food Trucks in America” for 2012 and 2013. In 2011, the Houston Press listed the truck’s “Frank the Pretzel” sandwich as one of its “100 Favorite Dishes.” And that same year, the truck was awarded a “My Table Houston Culinary Award.”

Phamily Bites. With a menu described as “Vietnamese- and Asian-inspired munchies,” Phamily Bites has the honor of being the first Houston gourmet food truck serving Vietnamese food. In 2014, the business was named one of “The 10 Best Food Trucks Right Now” by Houstonia Magazine and was listed as one of the top 5 food trucks among the “Best of the 2014 Houston A-List.”

Served from a truck named Sasha, dishes include their specialty, pho, a savory beef noodle soup that’s comfort in a cup. Sample the tasty Vietnamese eggrolls–the pork and shrimp and/or the vegetarian.

Pi Pizza is named in Houstonia Magazine‘s 2014 article “The 10 Best Food Trucks Right Now,” and in 2013, the truck was listed in “The Rest of the Best: Houston’s Top 10 ‘Fancy’ Food Trucks” by the Houston Press blog.

Moving Coupons from A Better Tripp – Especially for Facebook Fans!

Happy Halloween 2013 from A Better Tripp